I have been wanting to make a blog post about this for many months now.

I more or less devoured the novella “Elegy”, as soon as I got my Battle for Azeroth Collector´s Edition in August last year.

Back when it was revealed, who was behind the Burning of Teldrassil, Christie Golden, the author of “Elegy”, recieved a lot of downright nasty comments.

I found it really unfair, (and unacceptable to go on a hate-crusade like this, over a story of a video game, but that´s a debate for a whole other post) and I wanted to make a post highlighting all of my favorite parts of “Elegy”.

Christie masters the English language to perfection and I thoroughly enjoy reading her work; it helps me learn more and it is written in such a way, that it fuels your imagination so easily, I must have read it over three full times by now.

So here are my favorite parts from “Elegy” (and give me credit, I actually worked hard to slim down – I think I had like half the novella listed here at one point!)

I originally wrote these paired with my own comments, but I have decided to let them stand on their own instead.

All pictures are taken from Wowpedia. I wanted to show all of the art from the book, but became unsure of copyrights, so I wanted to play it safe. If you want to download it though, it´s right here. 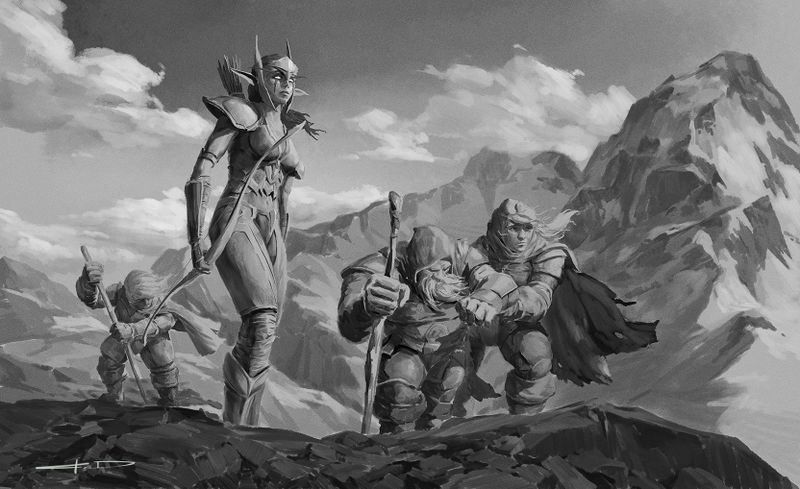 Malfurion bent over a silverleaf bush and plucked a leaf, crushing it between his fingers and inhaling the clean, revitalizing aroma. As he did so, he brushed the plant with his other hand, murmuring his thanks. Three leaves burst from the stem; Malfurion had repaid the plant threefold for its sacrifice.

Delaryn watched Cordressa go. They were Sentinels, hardened veterans of more battles and even wars than most of the younger races could remember. Some members of the Alliance and the Horde thought that, because the kaldorei were long-lived, death was nothing to them. As if one could have “enough” of life – of joy, of laughter, of love, of ritual, and wonder. Of simply being kaldorei. 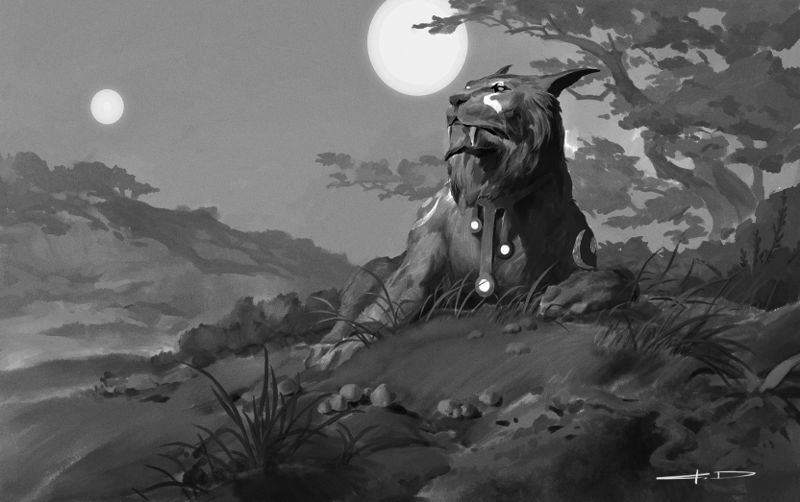 She felt the tentative brush of his fingers against hers, ready to draw back if she did not respond. But she did. Of course she did – Delaryn could not envision a time when she would not. Their duties – and truth be told, their natures – kept them apart, but Elune saw to it that they always reconnected.

She ran to the commander’s quarters and seized a linen shirt. The druid caught the scent, then crouched low and peered up at her. For an instant Delaryn hesitated. Druids were not animals. They usually did not allow themselves to be ridden like beasts. But he knew, and so did she, that the rogues had killed the night sabers so that any survivors would be on foot – and there was no time for that.

The Forsaken made no answer but laughed again. Delaryn raised the dagger, but the rogue’s laughter turned to a coughing wheeze. Gooey liquid spewed from his throat, and then he lay still. He had cheated her; his wounds had claimed his unlife before she could.

Ferryn didn´t know, but whenever the two of them parted, Delaryn prayed to Elune that he would be safe. She asked for that favor again now and for the first time, she had the faintest fluttering that, in this battle, the beautiful, loving moon goddess might not answer that prayer.

“King Anduin?” It was the Sentinel – Eriadnar, Anduin thought her name was. “This is only the beginning. Shan’do Malfurion has issued orders for a complete evacuation – not only of the city, but of the surrounding area of Darkshore.”

Then be believes there is no hope.

No one said it, but he could see that everyone present shared his thoughts.

The two women embraced. The queen didn’t like to have favorites, but there was something special about this soft-spoken green-haired priestess. They had always had a rapport. Quietly, Mia asked her, “How is everyone holding up?”

“We are kaldorei,” Astarii said simply.

When a portal whirled open, the normally reserved night elves cheered. The magi who stepped through, who until this moment had only cautiously been made welcome in Darnassus, smiled un surprise. The cheers swelled when they each opened another portal – and reached a crescendo as, over the course of several minutes (and with not a few interruptions) a dozen bears, birds and nightsabers came through.

He pulled Delaryn to him and kissed her, softly this time, then pressed his lips to her forehead. For her ears only, he whispered: “I know you are afraid. And I know that you fear is for our people, not your own safety. But do not despair. We are not done yet. And we will make every death count.”

There was a swirl of violet at the corner of her eye. Vannara, who had been standing beside her, crumpled to the ground. An arrow fletched with striped feathers, its slender shaft adorned with metal bands and beads, protruded from her throat. 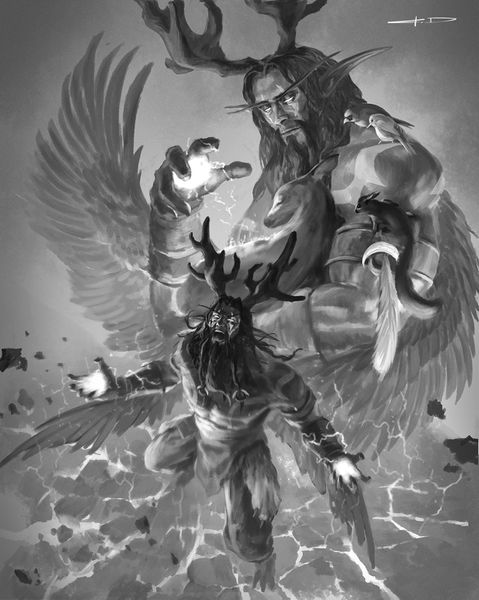 “Go,” came the single whispered word. Other ears would think they heard only the wind sighing in the leaves, but Ferryn knew the voice of his shan´do.

Malfurion Stormrage. Ferryn could not see his teacher, but Malfurion could see him – not just him, but his furious, breaking heart. As he so often did, the archdruid spoke exactly what Ferryn did not want to hear – but needed to.

Ferryn sprang, jaws wide, claws extrended, his heart slamming against his chest. Another brightness – a mage’s spell again. Saurfang’s eyes met Ferryn’s. The druid was too far away. He felt the rush of air as the orc brought his axe down.

So strong was the blow, so sharp was the weapon’s edge, that for the next few brief increments of time, Ferryn was confused at what he saw, as his severed head hurtled through the air.

But he had enough time to understand his failure before there was nothing.

“Do so,” Shandris ordered. “Tell them to have their druids command nature to bring us wind. We need to return to Darkshore immediately. Do you understand?” The druid, haggard and pale, nodded gamely. Shandris smiled and squeezed her shoulders.

“Give us just a little more. Then you can rest. What is your name?”
“Teshara.”

“Teshara,” Shandris sad, gravely. “You may have just saved your people”.

Through the weariness and fear, the young druid brightened.

As she withdrew the blade, she angled it so the black, tar-like smear of poison was visible on the wound´s mouth. Then she went to the next corpse. Eventually, the rest of the Sentinels imitated her. She loved them fiercely in that moment, for she understood exactly what it cost them…and what a gesture of trust they were displaying in her leadership.

There was nothing Delaryn could do. She watched, helpless, grieving and angry, as Saurfang charged – as Tavar, so young, so full of talent and promise, drew his daggers and struck out at the high overlord of the Horde. The blow did not land. Saurfang´s did, cutting cruelly through the youth´s neck. 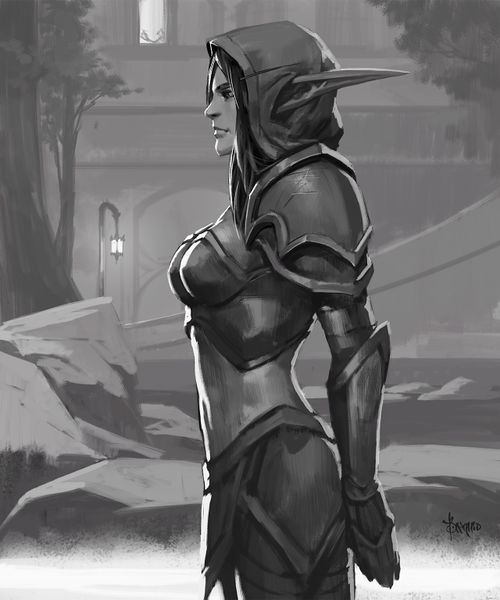 But then…Delaryn shivered violently. Some instinct older than time made her recoil. The hairs on her arms lifted again, not from the presence of Malfurion and his near-godlike power over nature, but from something else – something twisted, wrong and un-natural.

In small groups, the spirits of the dead were indeed innocuous. But in large numbers, they could bring down a demon lord – and they had. (…) But if the wisps could not make a tight cluster, they were no more dangerous than raindrops.”

We could win, Delaryn thought, and she almost swayed with the force of the revelation.

“There will be no forgiveness for this, Sylvanas”. 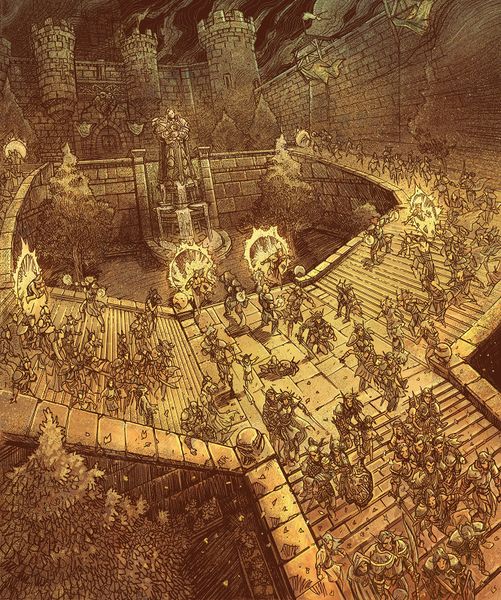 It was night. From atop her hippogryph, Tyrande beheld the grim sight of hundreds of night elves fleeting towards Darnassus from other parts of the World Tree, surging into the city and covering every inch of the pale white stone of its streets and the green of its grasses. And as the feathered wings of the great creature beat steadily, Tyrande´s heart broke even further.

She kept her gaze locked with Saurfang´s as she knelt and placed a hand on Malfurion´s still-breathing form. Sylvanas´ darkness had left its ugly marks on the archdruid, but it was the horrible gaping wound in his back that lanced Tyrande´s heart as her fingers sank into a rivulet of blood.

Tears filled her eyes, but she would not let the orc see them. She allowed herself one last look at the towering trees of Ashenvale. At her home.

“Soon, it will not hurt at all,” came a warm, familiar voice. A loved voice. Ferryn was beside her in his favorite shape – that of the nightsaber. For a moment, Delaryn rejoiced. But then she realized, that he was speaking. He should not have been able to. Feline mouths could not form words.

“Close your eyes,” Ferryn said. He stretched out in front of her, trying to shield her from the inferno’s tortured brightness. But his ghostly form was translucent. He blurred, but did not block, the sight.

(…)Would it still hurt, when she passed into oblivion? There was no Ferryn to ask. 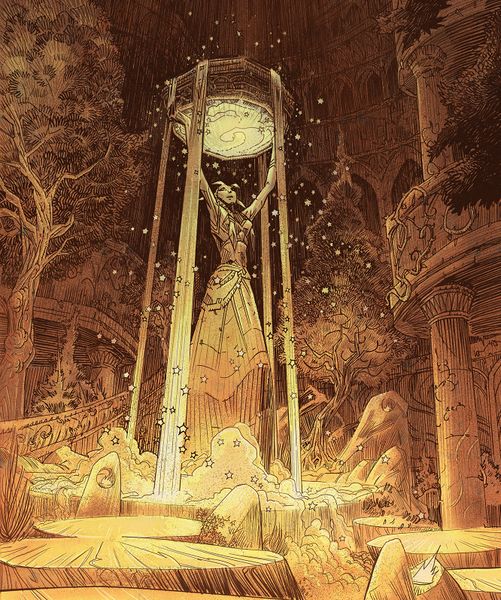 The sacred waters spilled. The great stone bowl tumbled down, and the statue of Haidene lost both arms. A chunk of the basin severed the statue´s neck, sending its head toppling onto the screaming night elves who had sought refuge in the pool. The moonwell shattered, and its sacred waters flowed onto the grass, red now with the blood of innocents.

The fire was relentless. The smoke would kill them, and the flames would devoir their flesh and even their bones. Only ash would remain. But they would feel nothing. No pain in the Lady´s light, in the Lady´s love. Mother and child both slept, breathing gently despite the smoke. Her duty faithfully discharged, Astarii allowed her own eyelids to flutter closed.

There will be justice, one day, but eyes other than ours will behold it.

The last thing she heard was a cracking sound as she slipped into slumber.

To the song my broken heart will ever sing

Of the story of the Tree of the World

And the death of all the dreams

It once cradled it its mighty boughs.

Anduin dragged a sooty sleeve across his wet eyes. His raw, aching heart broke at what he had to do. Quietly, calmly, he steeled it. After this, there would be nothing else. There was no choice.