Because gosh, there is a lot to explore in the depths of Vashj’ir.

But today. I shall be focusing on one particular area – not a very large one, but one that really became a mystery to me and ended up taking all my time.

See, while honoring the flames of the Midsummer Fire Festival, I forgot my blinkers. I always do, but up until now, I have managed to have one focus; the bonfires!

Without wandering off. Well, almost, anyway…

There is just something about the ocean though, so off I went…

“Once a great Highborne city housing some of the most revered night elves of Kalimdor, Vashj’ir was swallowed by the Great Sea in the Sundering and thought to be lost forever. Queen Azshara, formerly a beloved leader of the Highborne, escaped death in the depths of the sea when the Well of Eternity imploded.

Such salvation came at a great cost, as the queen and many of her fellow Highborne were forever transformed into the monstrous naga, doomed to wander the seas for thousands of years.

Their existence mostly remains a mystery to the peoples of modern Azeroth, though the Earthen Ring has learned of Azshara’s naga seizing Vashj’ir for an unknown purpose as the cries of the elements echo across Azeroth from the Abyss.”

Vashj’ir as a zone itself is also very captivating to fly around in – and I often forget I can fly there, and simply swim instead.

Swimming actually does seem faster as well (as an Orca), with the zone buff you get. (It is called Sea Legs – you get it after completing some of the first quests in the area, and it also grants you underwater breathing)

Our journey today takes us to the outskirts of Vashj’ir, at the Abyssal Depths.

Where as last time, I tried to swim from Vashj’ir and to Tol Barad, this time I wanted to swim in the opposite direction. Not really to reach anything in particular, at first, but just to see, how far I could get, and what might be there.

All the invisible walls I see during my ocean adventures never discourage me for long. Oh, no.

But what I discovered today was very different. It was not even, when the Fatigue-bar started ticking in, that I discovered something in the distance, I simply had to check out. It was actually visible before.

So, off I swim…That must be more than possible to reach, I thought.

Just another ordinary battle against the Fatigue-bar. Or so, I thought… 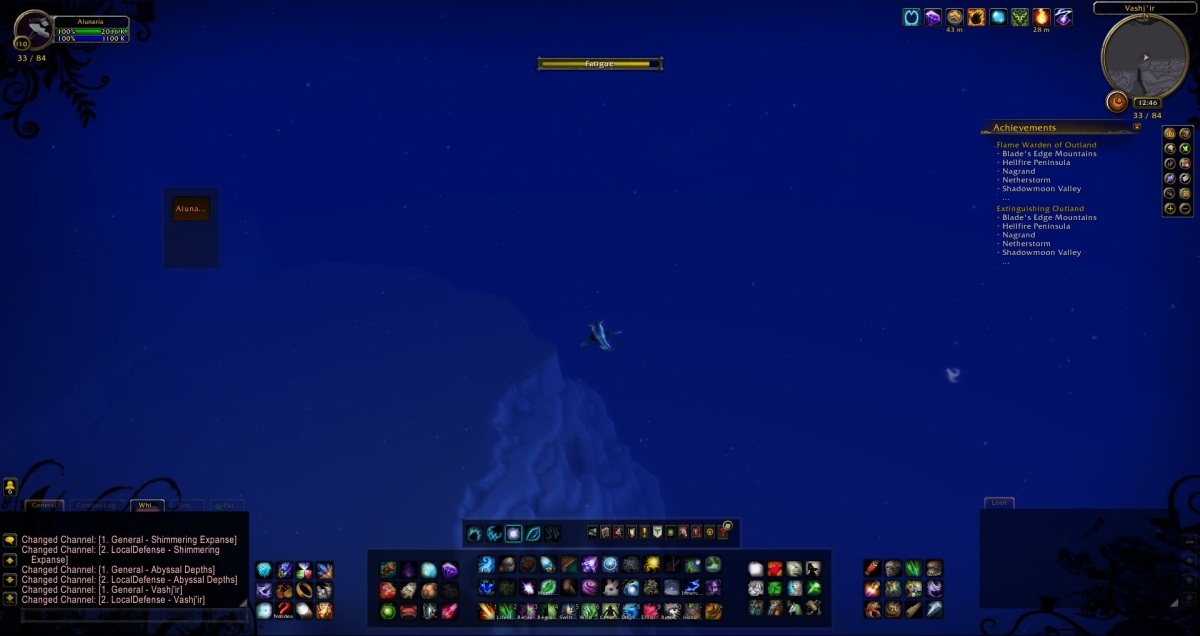 Because suddenly. Bam! This happened. Out of nowhere.

I got quite confused! One way or another, I died, and nothing in Combat Log was showing. Not to worry. A bug, perhaps, I thought. As if I fell off the map.

So off I go again. As with all the other times I have died in deep ocean, I get teleported to a graveyard in Westfall.

At least that brings in some very beautiful death shots.

Anyway, back to Vashj’ir. Arriving at the spot again – here, from another angle, the water is a little clearer, before I get further, and you can easily see, what caught my attention quite well; Those skeletons in the distance…

I had never seen them before. Obviously very curious, almost anxious to get closer, I went for another attempt…

Fatigue-bar, yes, yes, good to see you again, it sure hasn’t been long. (That is indeed ressurection sickness – Not really possible to get to my corpse in Vashj’ir all the way from Westfall :p)

Phfew, it looks as if, the instant death was just a bug…

Now I’m getting close! What IS that circle-like-shiny-thing behind the largest skeleton, too? See it near the cervical spine?

Fatigue-bar is just starting at this point, but I can last through that, until I run out of mana, so plenty of time left to swim around and investigate…

…But no. Bam. Again. No warning, no clear cause.

Now I noticed though, that it appears, as if I fall through the ground, and instantly die. No idea why. I am IN the water. Shoot!

Now I began to roam around a bit, to see what happened closeby to the same place Maybe there was another way around it, to avoid that invisble abyss (Hmm, well the zone IS called Abyssal Depths…)

But the zone actually ends quite abrupt.

I am swimming against the invisible wall in this picture, no Fatigue-bar, the zone just stops, right there.

Very noticeable “end” of the zone. Quite uncommon in WoW, really.

No…Whatever I tried, I could not get close enough to swim around the remains of whatever creatures it might have been…

This is the best shot I could get, before dying, every time. The circle-like-shiny-thing is actually not showing well in this shot, but it is there. 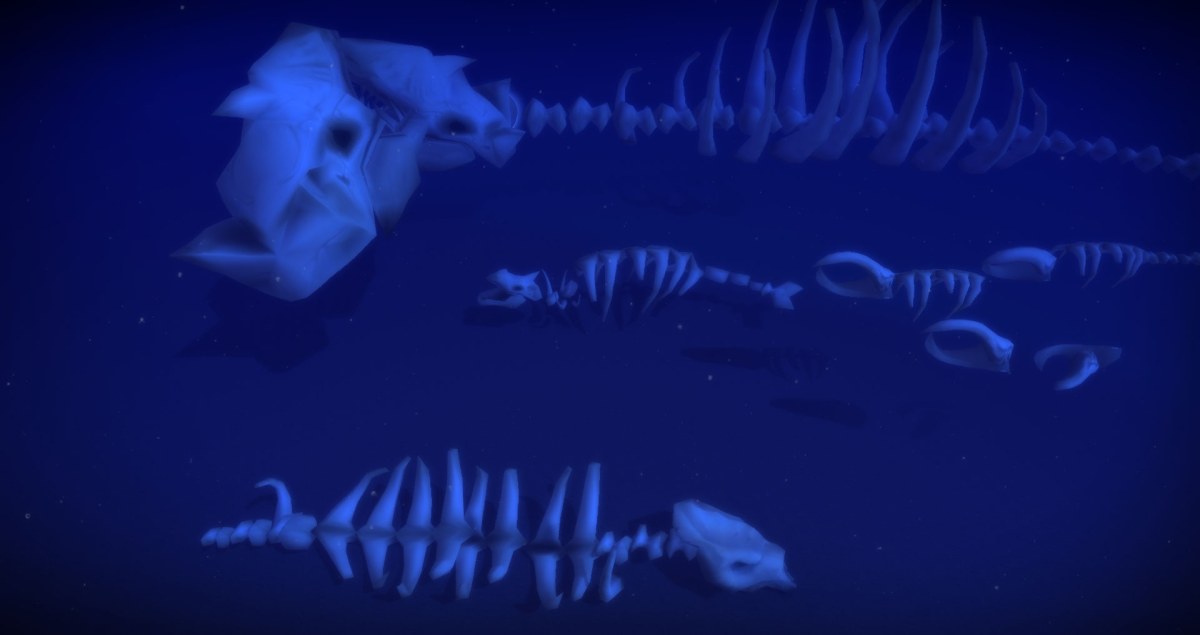 I took a break.  Renewed energy and all. One last attempt the next day. Trying to swim as close as I can, then fly instead. To see if I can get passed that place, where I  just “drop down to the ground (!?) and instantly die”, and then I will try to dive straight down to the skeletons from there.

Ok. Skeletons located. So up I go…

Oh, this poor Orca…Doesn’t she look a tad lost by now? 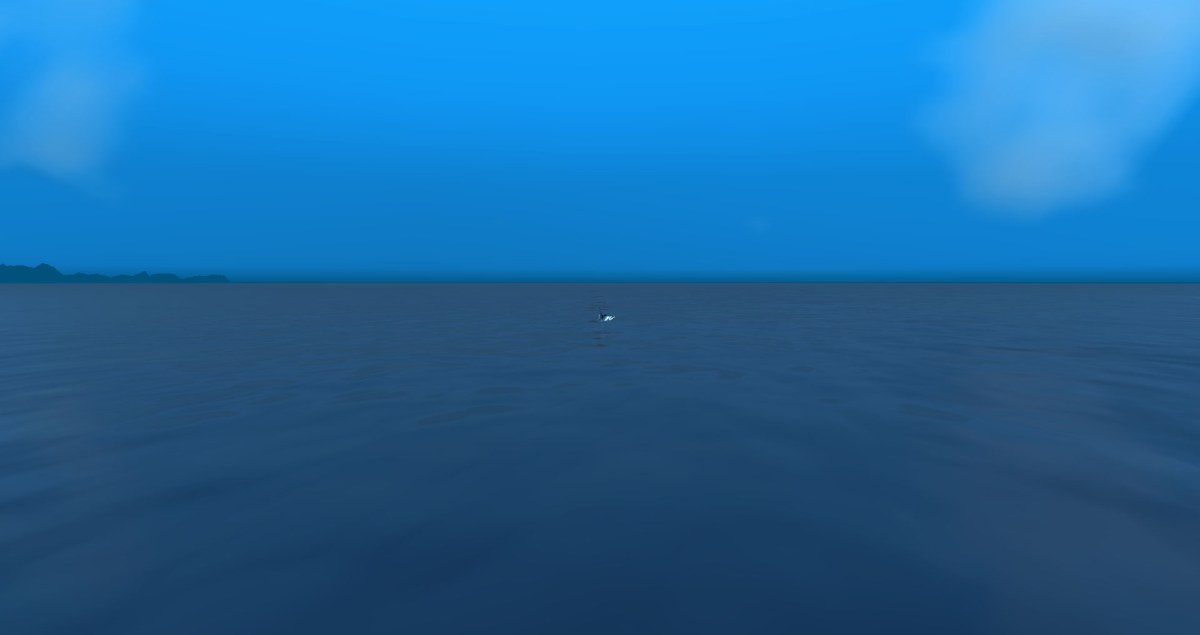 Dying out of nowhere, all of a sudden, so many times, kinda got to me at this point!

Ok. I take a look under the water…And locate the skeletons.

I am still so far away though…It somehow seems slower to swim down instead of straight ahead too, and the zone buff (that increase your swimming speed) is no longer active, since I am no longer “officially” in Vashj’ir. 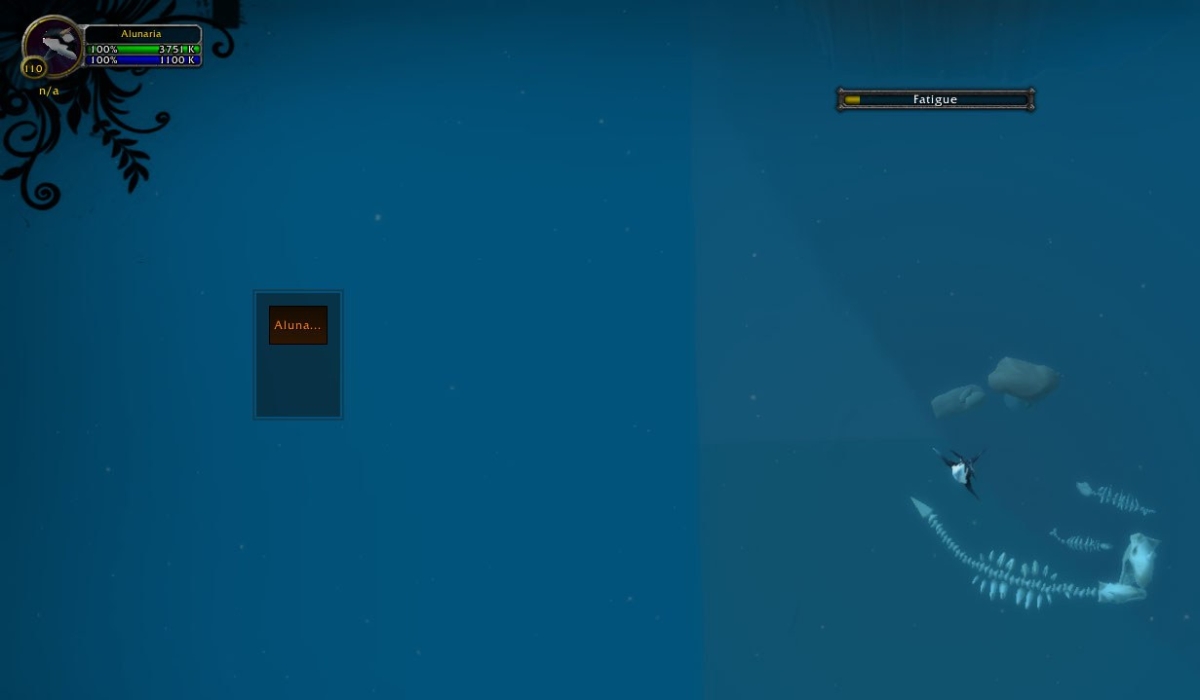 Here its very visible, how far the dive really is. If there was none of that “instant death” in my way, it was far better to swim from the shore and straight ahead instead of having to dive like this. 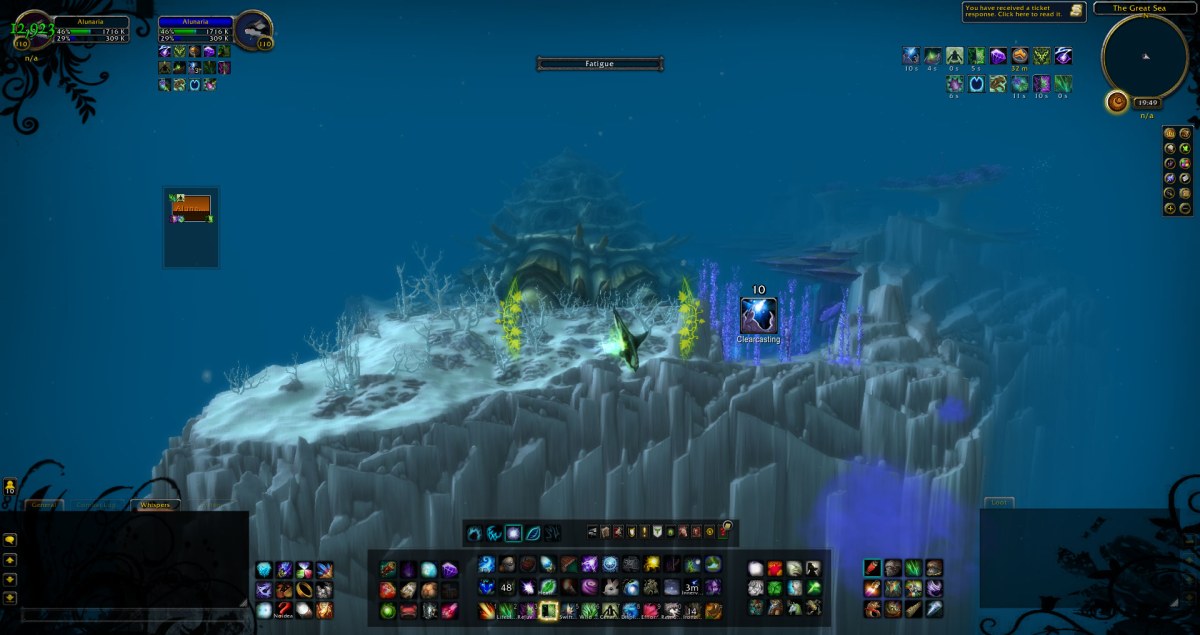 But no…This is as far as I could get.

And this is the shot from where I died. Looks a little odd, too, right? I think it’s the abrupt end to the zone that does it. Maybe there is a way around it one way or another. 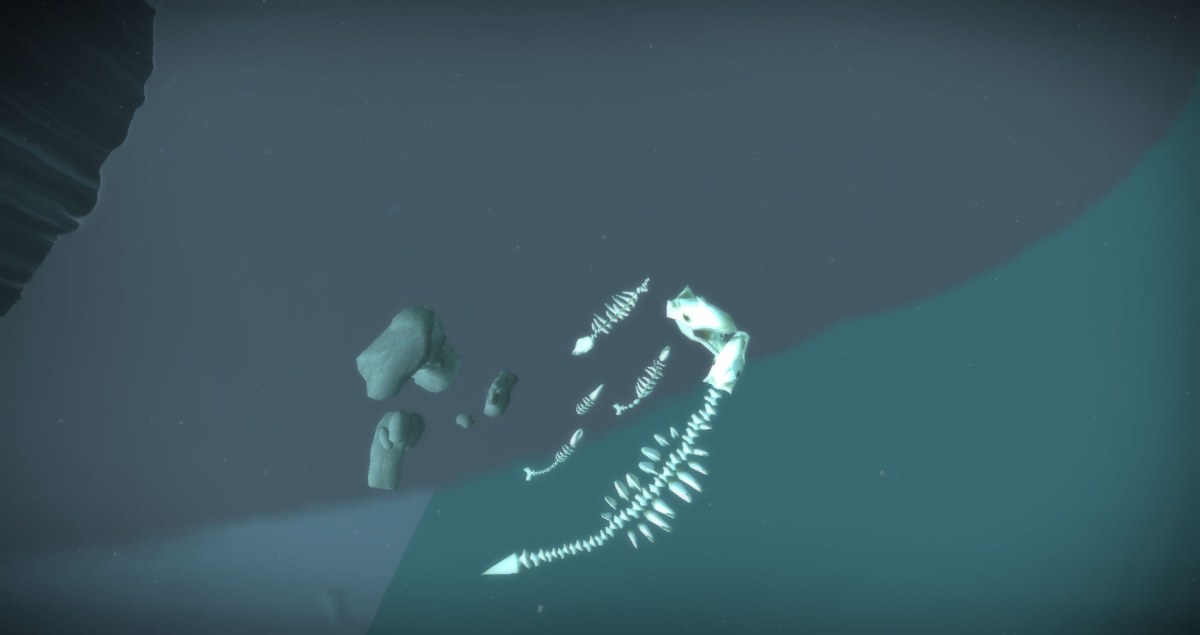 Right. Ah…No one can say, that I did not try.

…What these creatures are, I do not know. I can only guess. I do not see to recall them being mentioned in any of the quests in the zone at all.

I have not come across them before, and it has been years since I explored Vashj’ir – and even then, I did not explore with the curious eyes, I have today.

I do know, that they must have been enormous. I later on tried to google around, but there was no clear answers to it; only a little speculation.

In another place in Vashj’ir, on this same day, I discovered the remains of another gigantic being though.

I want to show it here, since my last attempt did not end with the desired result.

And this one was easy to reach, there was no invisible walls, no Fatigue-bar, no instant death from out of nowhere, and no craziness! (Allthough to be fair, I guess that I bring like 80% of the craziness, where ever I go :p )

Look at the size of it compared to me here. Wow… 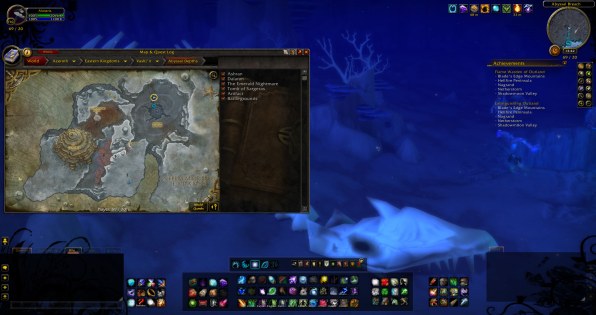 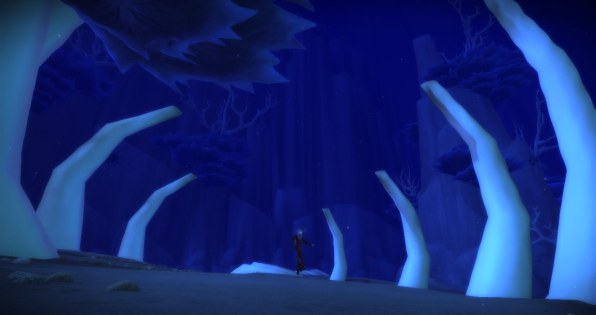 …What are these creatures?

One day I do hope to find out more.

While I was there, I also helped a Whale Shark escape; it was being held hostage.

That was actually a little scaring for me. If you can recall it from my Orca Tour earlier, there is just something about such a big creature underwater that sort of freaks me out a little.

The picture below is from that Tour. Some perspective it gives, eh!

But pushing limits is healthy, right? And this one was not hostile, and was staying in one place, so I wanted to get as close to it as possible…(I did free it, of course. Afterwards…)

…That ends my exploration tour in the depths of Vashj’ ir for now.

I will come back though. I am not done trying to find a way to reach those skeletons, that I never managed to get close enough to. And I’m certainly not done exploring the ocean either. So many things left unseen. So I shall return someday.

Before I end this post though, and, speaking about limits; Try swimming around Vashj’ir  with the Inky Black Potion on.

You know I had to try…But brrr…

It is really this dark! 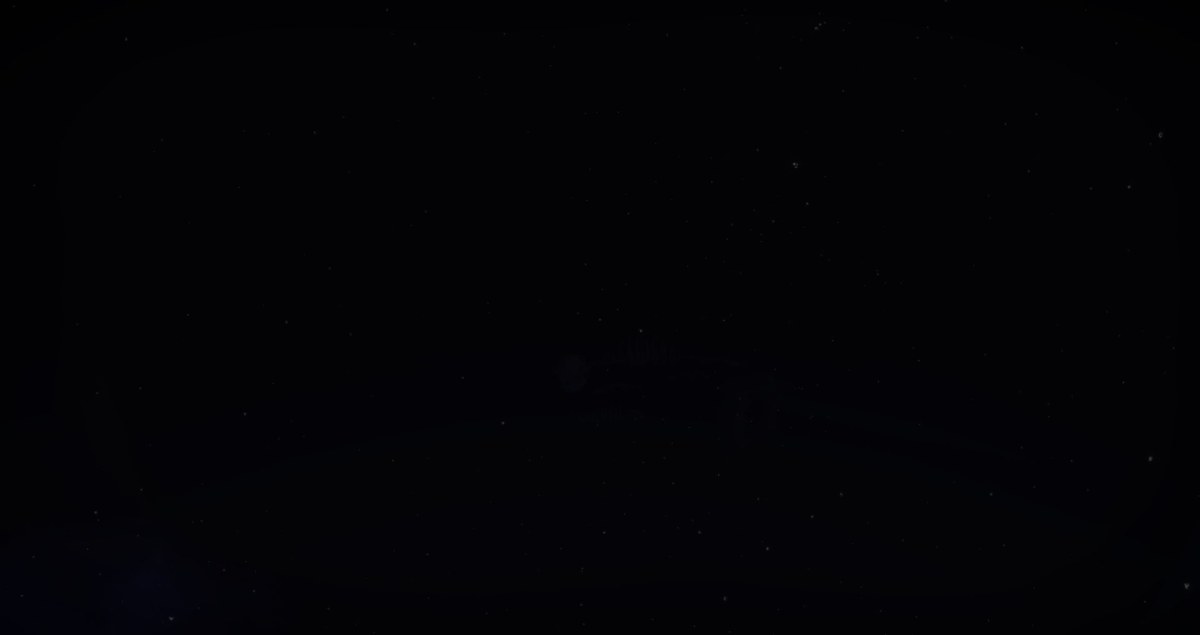 But quite beautiful too, though. 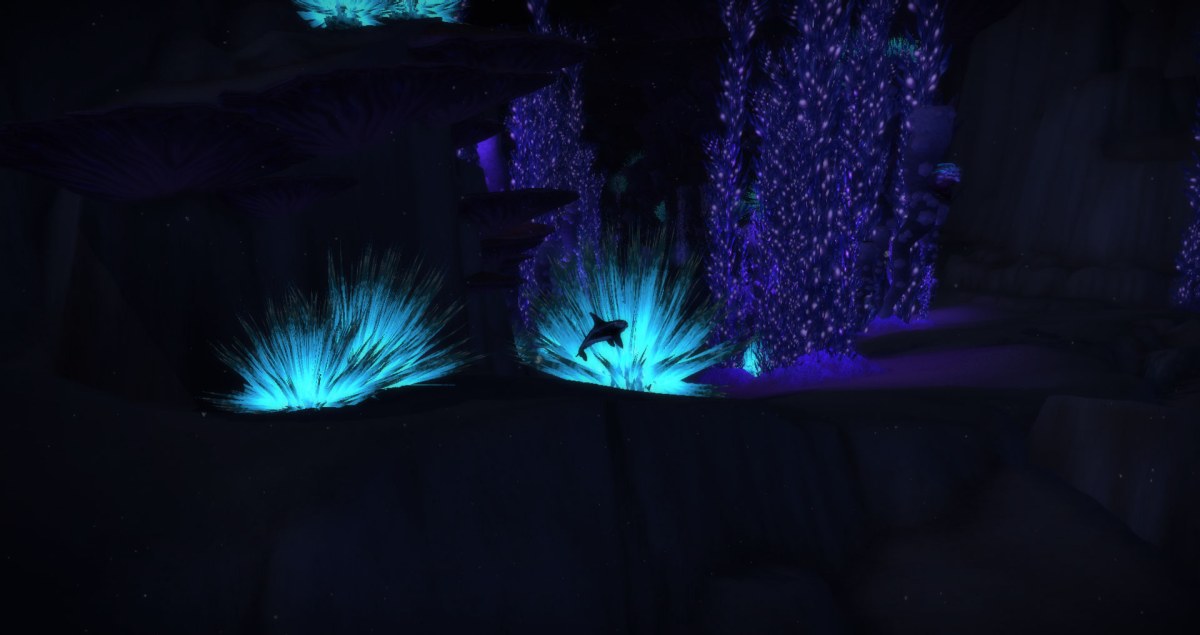 …Back to the bonfires with me. I hope  you all are enjoying the Midsummer Fire Festival. 🙂

On one final note; If you find these creatures fascinating, I highly recommend you to visit the site WoW-stories.com.

Eom of Silvermoon has some captivating posts on various topics similar to this one.

Have a wonderful weekend everyone, and thank you so very much for your visit; whether you read, like, comment – or simply are enjoying the screenshots 🙂

Edit: Oh, my! I found a screenshot, a Hunter used Eagle Eye for it. What is that thing? I am so intrigued..! The pearl (?) looks so much like one in Dragonblight, that those cute walrus like beings mention in a quest. I really do not know…

Fascinating world, that I know 🙂