Every now and again, I take a building and explore it in depth; Every nook and cranny, as well as the NPCs. I try to find a little background info too, and generally just let my mind wander, if only for a little bit.

Because I recently begun pet battling, I went into the Magical Menagerie (for the first time…), since I wanted to try the pet battling Dungeon.

Many years ago, I used to just go into a building, find the NPC I needed, and out again. On with the show!

Now things are a little different, and I find much greater joy in the small details.

So join me, while I take a look around! 🙂

When you first enter, you see Draemus, an Exotic Pet Supplier. He was added in Legion, and I have not managed to find anything else on him. He actually encouraged me to “have a look around”, and so I did! (He is your guy to go to, to buy the shoulder enchant for those Pet Charm-drops I mentioned earlier.

In here, we will also get to meet Breanni, who actually is is modelled after the owner of Warcraft Pets

Sometimes you can also find her at the Darkmoon Faire at the petting zoo, and she is the one who sends us the “rewards” we might earn when accomplishing an achievement which has to do with pets (and mounts, I believe, too?)

The owner of Warcraft Pets actually took a screenshot of his character next to the NPC sometime ago in game, which I found here 🙂 The resemblance is uncanny! 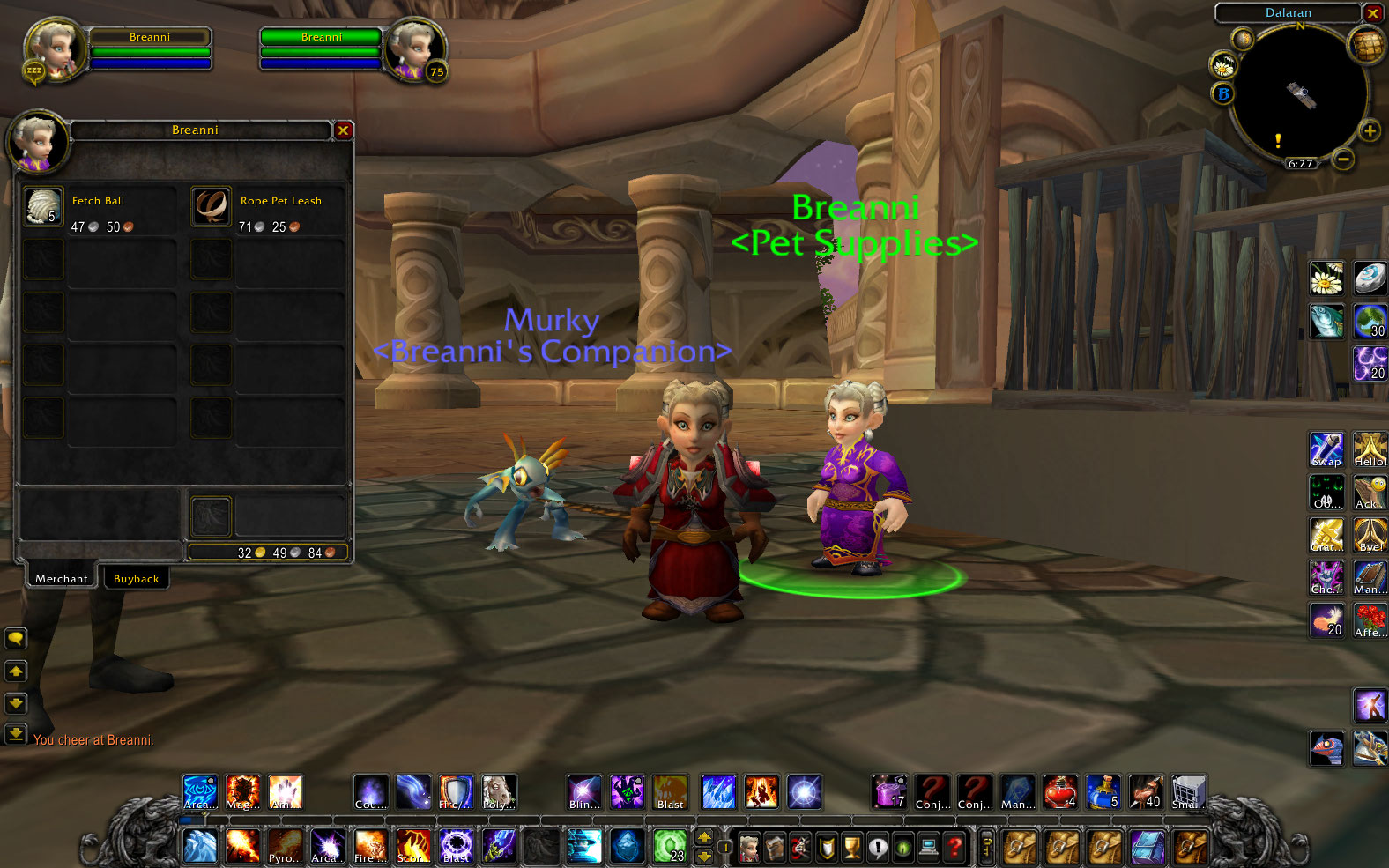 Next to her is her pet arcane elemental, Manapoof. This is important!

I mention this, because I found out (later) that it actually can teleport you to Wailing Caverns. (Maybe even Deadmines too, now its in game?) Another easy way to get around the world is always welcome 🙂

Then we have Giada Goldleash, a Goblin, who was introduced in WoD, but now has made her way to Dalaran. She didnt want anything to do with me, but hey! Her loss…

Standing next to her, we find Serr’ah, much similar to Giada, not too fond if Night Elves, I suppose…Also from WoD, now moved to Dalaran 🙂

Oh, but look, someone who does want to speak with me! Tassia Whisperglen, the Stable Master. She too moved here from (Old) Dalaran. (She also participated at Isle of Thunder.)

Ah, moving on to Lio the Lioness. We sure have seen her around.  She used to mock me in my Garrison for very long, every time I failed at the daily pet battle quest. No more, Lio! No one knows why she is called The Lioness. When you ask her, she actually says:

Why are you called the Lioness?

Next to her, and the final NPC in the room, is Tiffy Trapspring. Also from WoD – in your Garrison. You know, I kinda get why they rather want to be in Legion than WoD…Trapped in a Garrison all day, can you imagine? Oh, wait..! 😉

She too is selling Exotic Pets and Accesories.

On the sides you see different objects on display. Rather brutal collars, that I will never buy – and oh, I guess it’s true what they say; the more Elekk plushies the cuter (When are they going to make that a real toy you can purchase in the real world!) Do notice the murloc too 🙂

Haha too, cute, a quick search found a few that actually craft these. I should do that too someday.

No wonder that fish is all alone in its tank…

See what is in that cage…Oh that Worg Pup…Who else can remember the quest you got, to get it back in Vanilla from Lower Blackrock Spire? I can remember stealthrunning to it, capturing it and…release corpse 🙂 It was fairly uncommon to see it around, back when there were so few pets in game too. (Now it just drops from Quartermaster Zigris.)

And the other tank, shows this poor fellow! If you ask Tassia, she actually says:

“Almost all accounted for! Who would have thought moving Dalaran would cause such problems? One more pen, the birds and then everything will be back to normal!

<Looking around the room>.

Except for that poor fellow over in the fist tank. I hope they can resolve that soon”

Let’s not forget to go outside and admire the statue 🙂

Oh, you know me too well. Surely I cannot end this post without visiting the shop at nighttime 🙂

Thanks for joining me and happy day to you out there 🙂